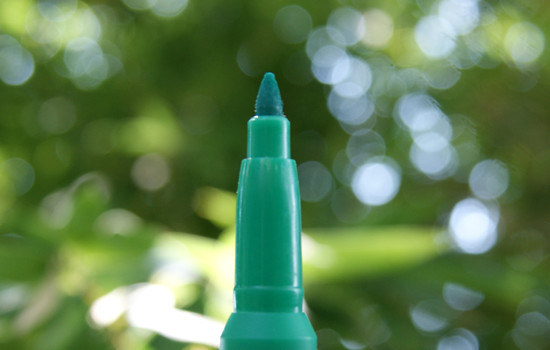 Sakura Permapaque Fine Point Marker has a name that really puzzles me. It's not fine (looks like normal marker width to me), opaque or paint-like. The pen has a marker point that's fairly firm and just wet enough, it's shaped like a bell version of the cylinder, which means that when used sideway,  (thanks to the curve) contact area with the paper isn't that much broader than the 1mm tip (being squished). 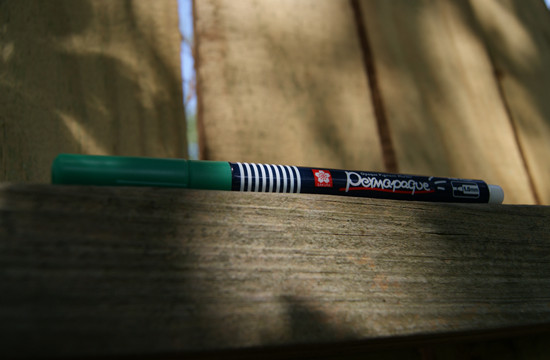 For a disposable marker pen, the Permapaque is barrel is nice, solid and weighty (for a marker) and the plastic on the cap and grip are both hard and resistant to scratches.  I like the rib on the cap that makes it easier to take off/put on.

The pen itself is kind of like generic marker (haven't used enough of them to see a difference) and the smooth tip leaves a semi-opaque (it looks 75% opaque in the picture but the actual stroke is see-through enough to be used as a highlighter) and consistent line. The color green is more of an emerald green than neutral one.  The pen is alright and there seems to be an interesting selection of colors, I just didn't like how fast the tip wears out: After several pages of doodling, the tip was already losing the stiffness and became less precise.

Overall: It's a bummer that the outside fares much better than the cord. At least I found it at Micheal's clearance bin for 30 cents (normal retail price is $2.39) so it wasn't a waste of money.
Posted by Citrine