Thanks to the overwhelming popularity of M1dori Traveler's notebook (written that way so it won't mislead people on image search), many companies have come up with their own versions of the simplistic and refillable notebooks. Some are more original (with different sizing, design and types of leather used) while other are more like shameless clones. Duoe (Pronounced "Duo- E", a Chinese brand based in Guangzhou), belongs to the latter. 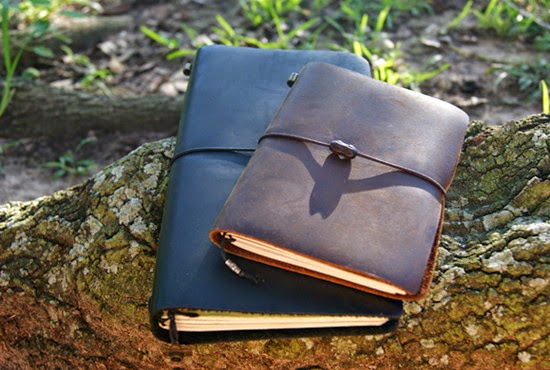 I bought these Traveler's Notebooks specifically as a M-brand substitute (there I said it), as I really wanted a journal in this style and I was too cheap to pay another 50 dollars after losing my first (on my way to school). Aside for the leather choices and three sizes, there are many styles available: standard, leather accessorized, simplistic and a "Vintage European" (which has a belt like wrap and comes with leather and a built-in bookmarks). The prices range from 60 to 120 RMB, which is 10-20 USD.

I picked a black Leather Accessorized for in largest size (22x12.5 cm, the same as the larger M-brand) and the a standard style reddish brown in passport size (14x10.5cm), the in-between is 18x10.5cm (which I didn't pick that up because it would be hard to buy refill for that in US). 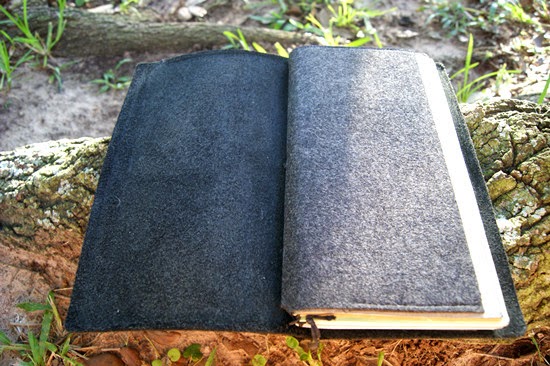 Let's start with the Black - My first impression is that both the leather texture and color are very similar to those of M, soft to the touch but with a big of stiffness to hold the shape. Duoe is a tad softer (but it's in no way flabby) and the interior is feels more textured and fuzzy. 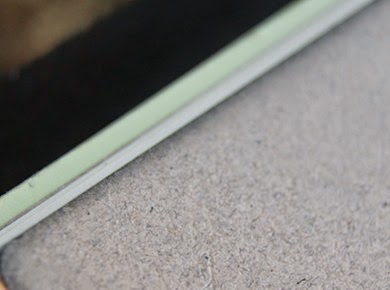 Something I don't like - The dye on the black version comes off and gets on the paper. Anyway, you can prevent that from happening by repositioning the felt card holder. Beside the card holder, each notebook also comes with a pen clip (metal clip minus the leather loop that you clip the pen clip on it), four notebook refills (blank, manila, grid and ruled) and a light brown replacement rubber band. Each notebook is packaged in a paper box and came wrapped with an overkill cotton handkerchief (assigned randomly, I got a hipster blue plaid for the regular sized notebook and a green floral for the little one).

A simple cotton bag will do...really (I can never wrap it up the way the seller did).

Instead of the having a hole on the back of the notebook, the leather accessorized version  is punctured in the middle of the spine while the knot stay hidden all the time. The copper stopper is a simple ring (but you can order customized ones for 1.5RMB/0.25USD a piece. I was tempted to get some teddy bear or crown but I am too lazy to take it apart and reassemble them all back. 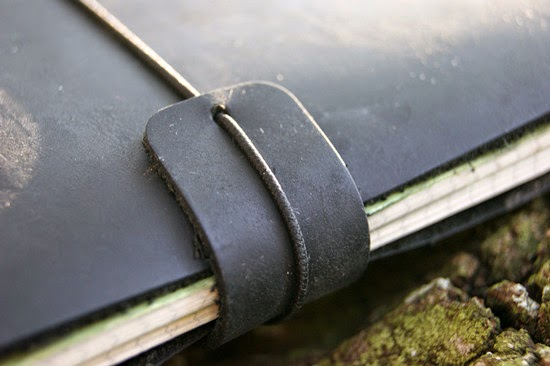 Another feature I like is the extra piece of leather on the rubber band, which prevents marking on the cover. 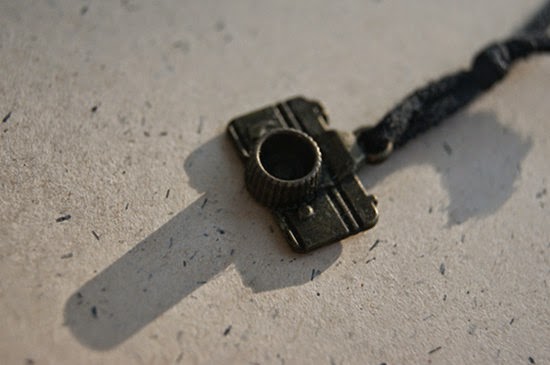 The free bookmark charm (it was randomly assigned but I got it back in February but now can be specified)that make the the black thread much easier to find. 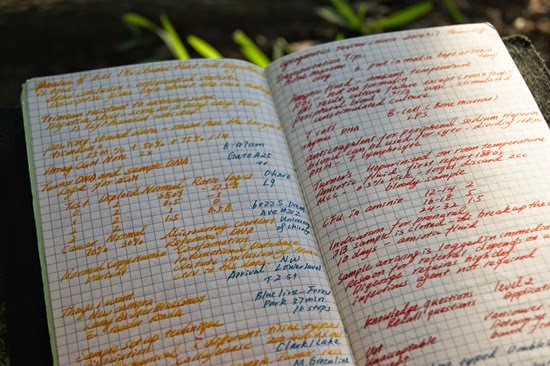 Now to the actual paper. While all of these Daolin paper refills are fountain pen friendly: There is no bleeding, feathering and very little show through. It's smooth enough for the ink to shade well but not too slippery. In fact, it pretty much writes like Rhodia with a better price tag (4RMB, just divide it by 6 for conversion to USD). From what I remember, The M-brand only comes with 1 black refill with a seemly smoother and thinner paper (but they are around 8 dollars a piece though). 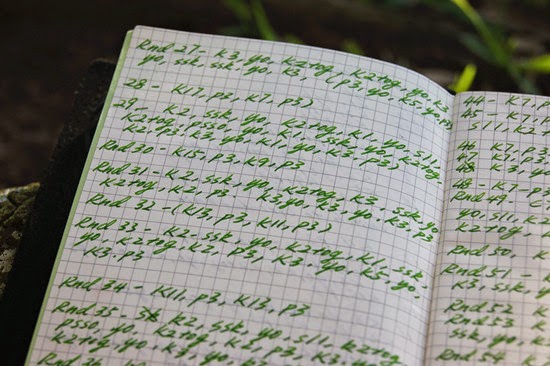 I really like the grid paper (so much that I have it filled mostly with grid refill and barely used the other) since having a guideline make my hand writing neater. It also handy for note-taking or jotting down knitting pattern (as I don't like print out loose sheet or having to look at my phone every row). 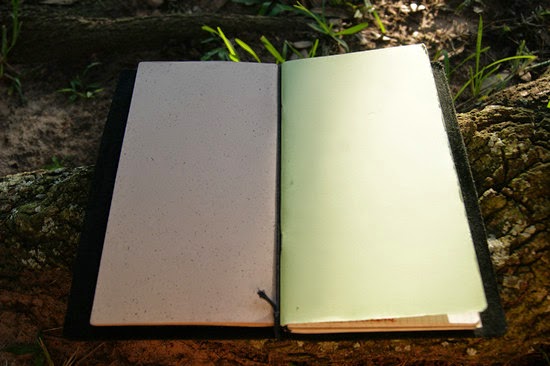 Well, now you get a glimpse of the manila paper (nope, haven't used it). My least favorite of the four refill is the rule page, each row is too wide for my liking and the paper seems a bit looser (and more prone to show through). 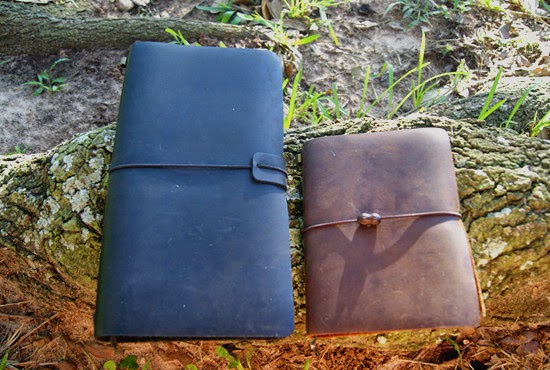 I went for reddish brown (the call it "high class red brown" on the store, lol) in smaller passport size. This is the standard version. Instead of a piece of leather, there is a little wooden peanut beads in the front (in which the knot for the rubber band is hidden, so this one looks seamless). While I like the natural color as well as the smell (they both smell like leather that absorbs whatever hand cream I was using) of the leather, the cover of this is softer and definitely a tad flabby. 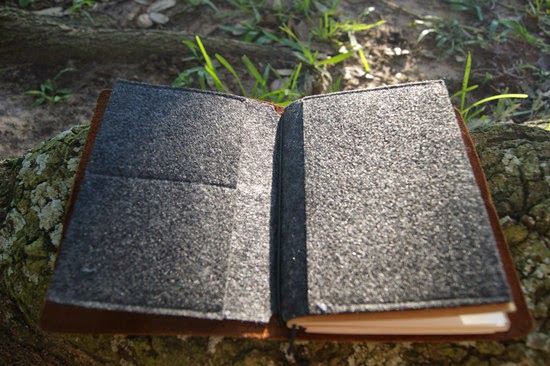 A card slot on the front of felt pouch and another compartment on the right. Don't let the passport size fool you...Because if you slide your passport in the second compartment, the seam breaks. 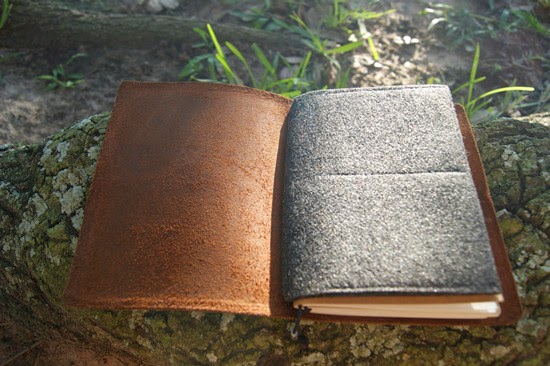 A more cleaned up (less fuzzy) interior for this.  The book mark for the standard version is just a small bead strung on the black thread. 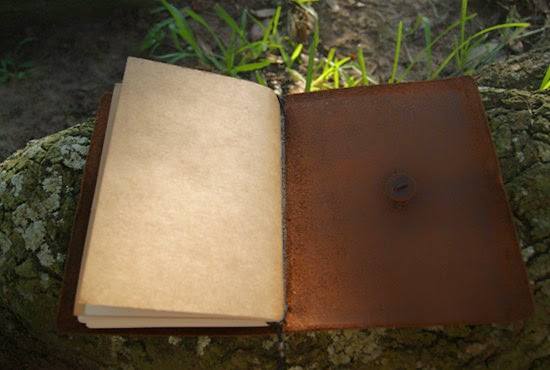 A hole on the back (with a little button as the stopper, so you don't like a random knot poking out...Not that it bothers me though, in the case of M-brand). 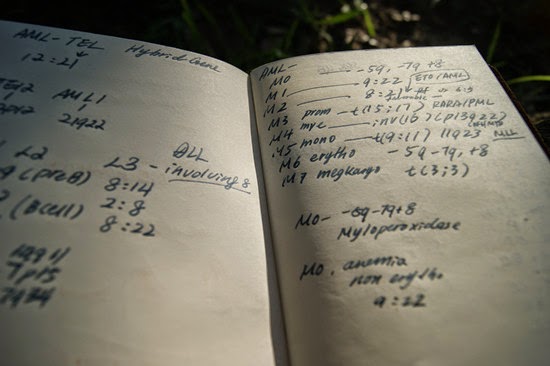 The smaller one is filled with three little blank refills, which I hate (not the paper seems to have worse quality compared to the blank refill on bigger one, my writing is also messier when there is no guideline). Even though this is a handier to carry around, I ended up not using it due to the paper quality.

Overall: While these (never had a smaller one so I can't say for that) are very similar to what they are trying to copy, M is definitely better in terms of leather and paper quality. It it 2.5 to 5 times better (since they cost 3x more)? You have to be your own judge. While I personally am not in a hurry to get another M traveler's Notebook, I would like to try out other colors by Duoe, as they have colors like oat-brown, greenish black-gray and lighter khakis).

Bottom line: Buy the refills (if you have means to order off Taobao)! 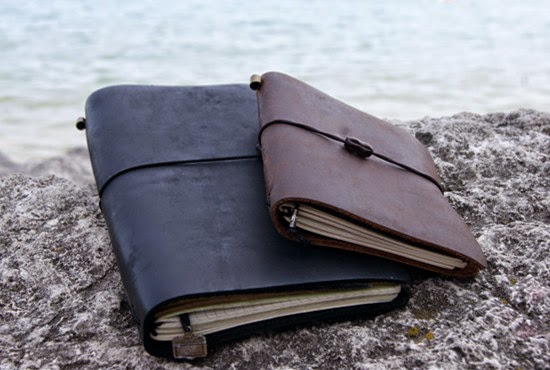 Bonus pictures - (that didn't make it as the main ones) Travelers Notebook during travel (the back in Lake Michigan). They look a little messy because I spilled my lunch inside my bag. The journal was fine after a wipe. However, my (point and shoot) camera was not...That is the 3 camera that died of drowning, at least it lived a longish (5 years) and purposeful life.
Posted by Citrine