I have been eying on this Sailor Fude de Mannen fountain pen (at Jetpens) for quite a while (well, one of my first search terms there was "Green Fountain Pen" and this was among the top results, along with the Green Lamy Safari which I snatched right away). Anyway, it was put aside for several times until this June, when I finally gathered enough products to reach the 25-dollar free shipping limit. 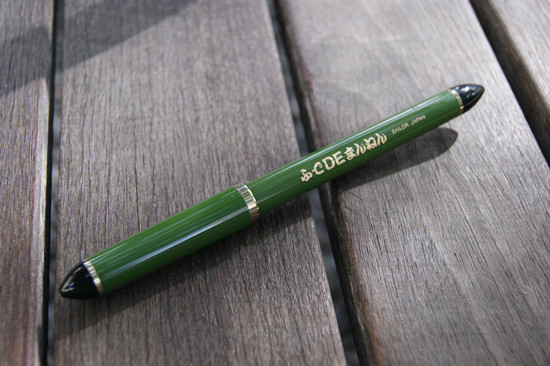 My first impression of the Sailor Fude de Mannen is how ridiculously huge it is (Looking at product pictures, I always assumed it was the slimness that makes it look long, when it turned out to be the other way around). There are two Sailor black in cartridges that came with the pen, both of them fit loosely in the barrel. The pen feels awkward (and off-balanced) when posted and even more so when put inside pants pocket, where it pokes out like an asparagus. 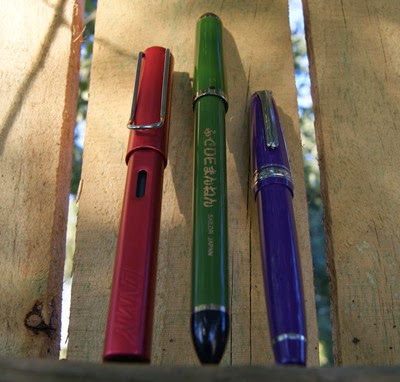 The Bamboo 55-degree one (there another blue-black with 40-degree nib) has gold trim (I am not a fan of gold but I guess it goes well with the color) and pointy black caps on the top and bottom of the pens, which are actually clasped on. Another reason that I can't post the pen is that when I pull of cap back out, the black cap would just come off with it. No clip is attached to the pen but there is a small plastic protrusion that prevents it from rolling around. 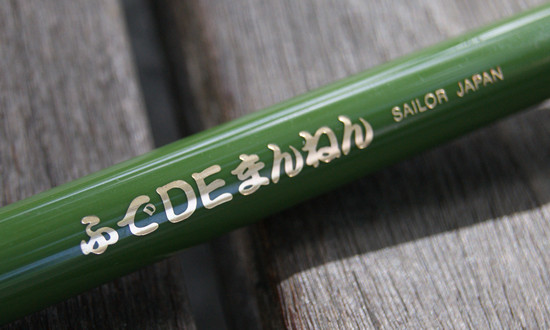 The plastic is smooth and somewhat shiny (now I know why I held it off for so long, I am vain when it comes to pen and I didn't like the brand name/model printed right on the barrel) plastic that's seems a little tougher and more scratch-resistance than that of Pilot 78g  but it also feel crisper (like less resilient and more susceptible to pressure). Anyway, I find it reasonably visually pleasing, except for the inconvenient length (will get back on that part later in this post). 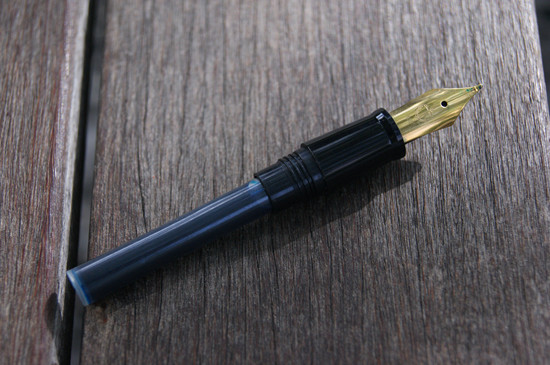 The pen has a very short feed, which is inadequate if you are looking for some gushing action but otherwise good enough for daily writing (and cheaper type/more absorbent paper). The plus side for such a small feed would be how fast it is to rinse clean and swing-dry but the down side would be the accompanied smaller grip section. Anyway, since the body is so long, and the thread for screw cap is non-obtrusive, it wouldn't be difficult to hold a little further down the barrel. 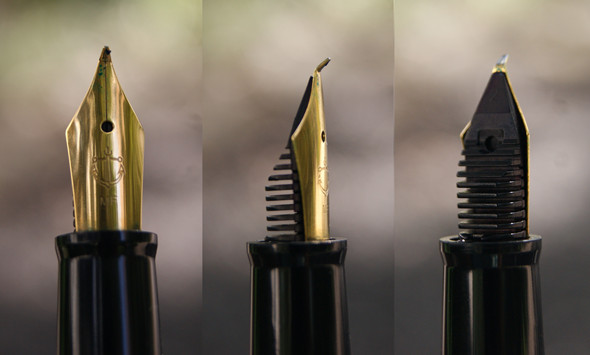 Now comes the heart of the pen - Sailor named it Fude de Mannen (brush pen of fountain pen) because the hard steel nib, which bends 55 degrees away from the vertical. And the triangle formed by the bending would allowing some (actually the number is infinite if you look view it the infinitesimal way) line variation if you change the writing angle like a car knob. 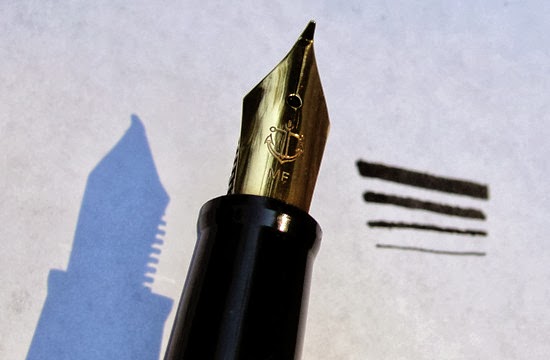 The naming confused me a bit (and I actually thought the nib was somewhat springy) because the working mechanism and the effect of the pen are quite different from that of an actual Asian brush pen, which produce width variation based on the pressure exerted (which is more intuitive). The width difference Sailor Fude de Mannen produce, is more of a line variation. You don't get that great of a difference of widths unless you are constantly changing angle (or rotating the grip) as you write.  Anyway, I can see this is a great pens for artists and doodlers, as it gives straight and even lines and save you all the trouble of switching pens mid-drawing. 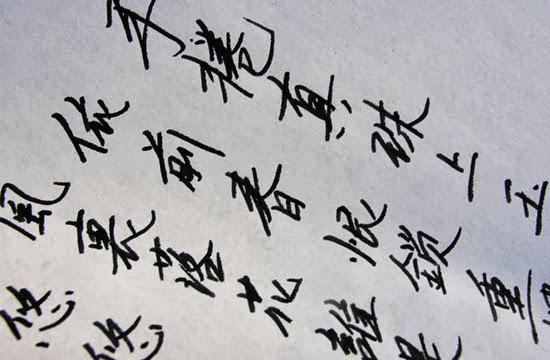 (Apparently this is the only post-grade-6 level Chinese poem I know by heart, need to memorize another for writing sample). To me, even the wet-enough nib glides on page and give me a sense of liberty as I write, it looks and feels positively like a hard-tipped pen (not even close to a brush).

Now back to the asparagus part, apparently the length was designed so that you can hold it in the middle section, just like a brush. For my understanding, Asian art/calligraphy brushes are held in the mid-barrel because that's how to control flow on the tip that's soaked with ink. The nib-feed of Sailor Fude de Mannen is sufficiently wet and smooth when it's held against the paper, but when it's not that efficient enough to lay an intense line of ink, when the pivot is so far away. When I use a really absorbent paper (newspaper, because I am too cheap to buy) to practice my chicken scratch, it does gives a thicker, wetter stroke that's a little more brush-like. It's nothing that a posted, normal length couldn't do. 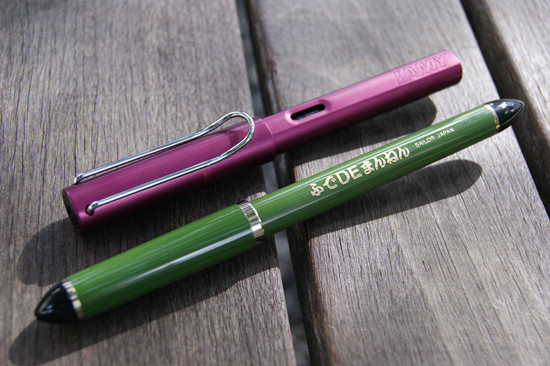 At the end, I just decided to redraw my small (ahem) grudge against the naming/length and just shrug at the cultural difference. Because in Chinese, this type of bend-nib pens are just called artwork pen. With no mention of brush (and they usually don't make it this long). Overall: This is a pretty good pen for the price and if you draw and write in Chinese/Japanese, you will like and get a lot of use out of it. (Yes, despite all the bitching, I actually really like it).
Posted by Citrine