Lamy Raspberry Al-Star is the special edition for 2009 and it's no longer available in US (some Asian sources said it was made permanent). I was lucky enough to discover one from an England-based eBay seller, who charged...A little less than 30 dollars (international shipping included!) for a brand new one in package (that's cheaper than a special edition Safari!) and since it's the European version, it also came with a silver colored plastic pouch (that I ended up needing). 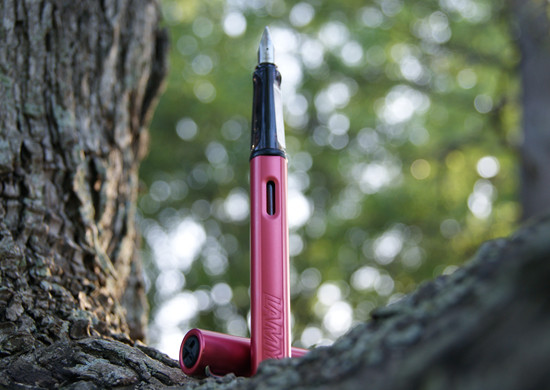 The Lamy Al-Star is around the same length as a Safari with a slightly chubbier build, the over-all design of the two are the same except Al-Star are smoother (as in, less angular on the edges) and feels more solid on the hand. It's a light weight one for a metal-body pen (it weights less than the resin-body, shorter Sailor Sapporo) but I like how it balances and the brushed-metal, cool-to-the-touch body. 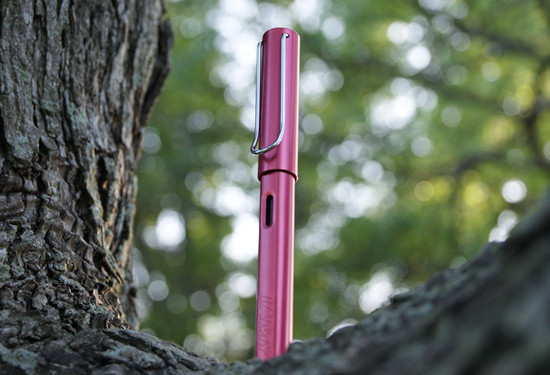 Like Safari, the Al-Star also has a cap that's denser (with a noticeably bigger weight per unit length) than the body, it not only feels a bit off-balance when posted (I try not to do it since it makes a chalkboard-scratching screech), it's also harder to balance...But I managed! (Maybe I love them because they/the flat bases are the perfect models for my outdoor glamour shots). 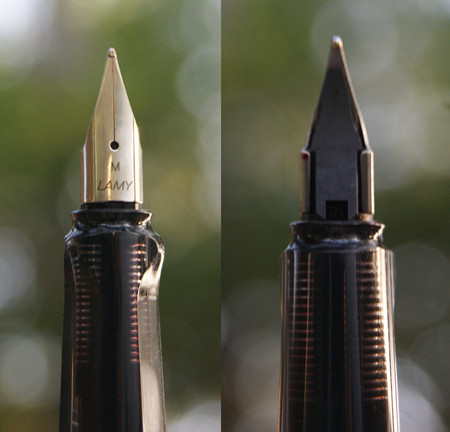 The transparent charcoal body show all the capillary and maybe's it's because the ink are evenly distributed (and the top is darkened so I don't see a huge glop of ink accumulated), I am actually not bothered by it. The Lamy M nib is smooth and stiff. Even it's doesn't glide on the paper like a skater, the specific break down of stiff-springiness is very compatible with my handwriting so I keep going back to it.

Of course, I hate the trigonal grip with a passion (if it's not creating new bumps on my hand, it just cuts skin on my existing one. It's like a daily regional exfoliation on my middle finger). Anyway, I just learned to suck it up since it's part of the attractive design. 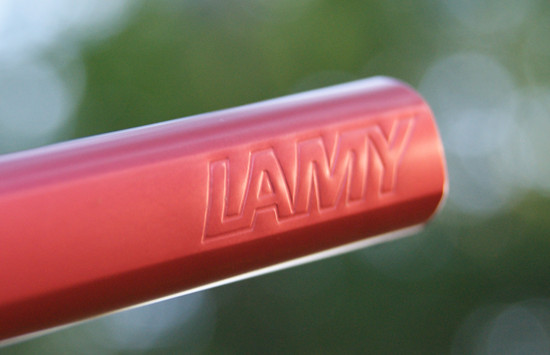 I haven't heard many people coveting the Raspberry color, but I find it really unique and magical: It's a pinkish red (well, raspberry pink) but there is also a hint of warm gold tone in the paint, which makes it look like ruby grapefruit under certain lighting. Even though I try to care for the pen like a baby, small scratches and dents still appear on the cap... 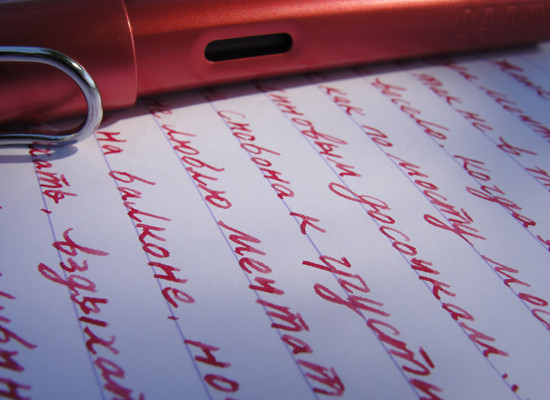 The closest match to the pen (in my small collection) would be J. Herbin Rouge Opera: A demurely dusty raspberry pink with medium intensity, decent (there are silkier inks out there) flow and no water-resistance. The writing sample is Olga's Aria from Eugene Onegin, as today is Tchaikovsky's 173th birthday! The ink writes smoothly and the shading is pretty noticeable with the Clairefontaine paper (but pretty much every ink is, as long as it's not too intense) but I feel that it's a little dry on the normal cheaper paper I use.

Overall: Love them both.
Posted by Citrine