After a decade-long hiatus from the world of fountain pens (it was rather hard to find in North America, especially for a kid without car or credit card), I was ready to embrace it once again...But where to start?

The Apple Green Lamy Safari seems like a good choice, as it's green, limited edition (I am a sucker for this kind of gimmick) and rather affordable...Wait, you call a 29-dollar (a converter costs an additional 4.5 bucks) beginner fountain pen with plastic barrel "affordable" (When you can get at least 20 Hero pens in China)?  Am I in the wrong planet?  Anyway, I quickly got over the price issue as I realize that pretty pen don't come with pretty price-tag. Apple Green is the special edition color for the year of 2012 (it should still be around til the May 2013 at the very least) - It's bright (borderline-neon), happy and quite easy to find inside a messy backpack. In fact, the color is the main thing that keeps me from hating this pen...Let's head to the lengthy review.
The Body of Lamy Safari is made of two, three if you count the cap, pieces of ABS plastic: It's light-weight (not so much that it becomes flimsy), solid, appears to be (Reads: It's not really) seamless and generally well-constructed, even though it does unscrew/and loosen up by itself occasionally.

The barrel of the pen, which is cylindrical overall but shaved flat at front at back, comes with two windows for you to monitor ink level. It's a very helpful design (unless you are using a viscous ink that adhere to the inner surface of converter/cartridge) but I usually screw it off to check anyway, just because I am OCD. 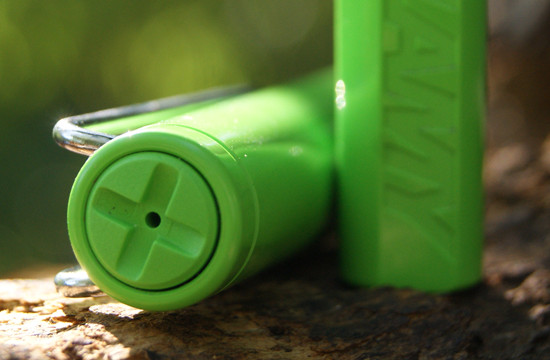 The cap comes with a jumbo paper clip styled...clip that's curved outward a little. It's moderately springy and very handy as can can slide it on my tote or pocket in a jiffy. The down side is that the suction created by the cap is on the weak side, so the lid slide out easily.

Another thing about the lid is that, compared to the rest of the pen, it has a noticeably larger weight per unit length so it will throw the pen off-balance when you 1. use it capped (it's long enough to be used along so it's not really an issue).  2. are trying to do a outdoor glamor shot with its lid on (doesn't apply to most people).

One of the major aspects of the Lamy Safari design is the trigonal grip (curved at base, shaved-off at both side), beside the artistic/hip look, it's supposed to let your thumb and index finger fall naturally and comfortably into the "right" places...
Unfortunately, I don't hold my pen in the (what Lamy think is the) "correct" way so writing with a Safari is awkward at the very least and uncomfortable/very tiring after a certain amount of time. With a drier and inconsistent nib like the one I have, I tend to uses more force at the thumb, which not only adds to the strain and discomfort, but also pushes the grip to the right, resulting the sharp edge cutting right in my skin.

Actually (took me quite a while to find out) , if you don't hold pens the "correct" way, there is also a way to use Safari as a daily writer. Simply ignore the direction and rest your thumb and index finger wherever you want. I personally just rest my thumb on the top.

Now comes the nib, aka the heart of a fountain pen. The first thing I want to mention would be the nib creep, a trail of ink that appears along the tines of the nibs (that reappear quickly after you wipe it away) this happens with all three Safari nib sizes and every ink I have used. It's can be irritating for my fellow OCD pen lovers, I stopped caring after 2 months. 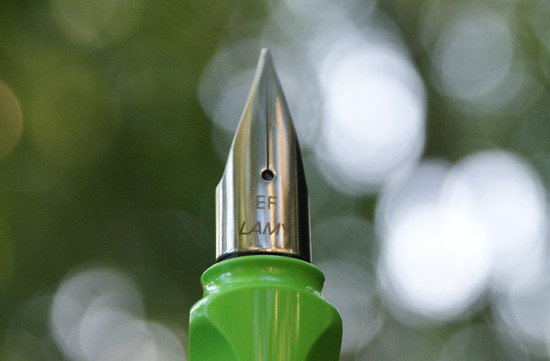 My Safari (because not all Lamy EF are created equal, really) extra fine nib runs fairly fine at around 0.4 to 0.5 mm, which is around the same as a Pilot medium nib. I was really surprised the first time I laid it down on paper...Geez, it was the scratchiest thing I have ever written with (I thought maybe it's because I hadn't used fountain pen for 10 years and they are supposed to give "a bit" of feedback) and it skipped 50% of the strokes I laid down...

Luckily, after a month of heavy use (me attempting to break it in/how I got my "baby bump"), it stopped skipping but the line of ink it lays is still very faint. I do also get quite a bit of line variation...mainly because it's just an inconsistent and scratchy nib that picks up fibers from the paper and drag them around... 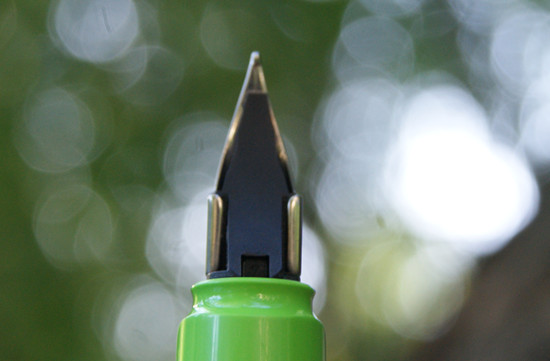 The only thing good about this nib is that it can be removed and swapped (with a bit of scotch tape and pulling action). After swapping to a fine nib, all problems were solved...At this point, you might wonder why did I write all those rant if I just got a defective nib? I don't think it's about one defective nib...The thing is that I come across these kind of complaints so often that it seems like it's more about Lamy's quality (no) control than anything. Even-though Lamy does have a warranty, most people would just shell out 10 bucks for a new nib (instead of paying two-way shipping, 9 dollars handling fee and wait for Lamy to send it back).

Beside the scratchiness, another of  Safari's structural glitch would be the nib size. I have seen a post on Penbb.com (a Chinese fountain pen discussion board) when a member showing the various width she gets...with three different extra fine nibs. Similar remarks are also seen in Amazon.Well, it's a cheap pen designed for school children, what you do expect? I am sorry that I expected more for the price.

The Safari I bought came with a Lamy proprietary cartridge with blue ink (after 1 use and one refill...already cracked). The $ 4.5 converter that has leaked inside the piston (after my second refill). I am not sure what's more impressive, Germany engineering/quality no-control or my Chinese luck.

Anyway, the converter holds around 0.75 ml of ink and the cartridge holds around 1.5ml. You can refill the cartridge (given that it doesn't crack like mine) with a needle-syringe (30 cents from drugstores), which is cleaner and more economical.

Lamy Safari Extra Fine Nib with the included Lamy Blue Ink cartridge - See how many (unwanted) width variations I am getting? It actually required quite a bit of force (and strain on my hand) to leave this much ink and most of the time, the line it lays just appear super faint, like this...

Safari EF nib with Noodler's Bulletproof Black (that's supposed to be a black ink), Lamy Safari Fine Nib with the same ink. Ohto F-Lapa with J. Herbin Poussiere de Lune, Ohto F-Spirit with J. Herbin Vert Olive. The Ohto pens are half the price ($16.5 for the pen and 1.65 for the converter) and they are much better writers.

Overall: Despite the nib, I actually don't hate the pen: The color of the body makes me happy and the pen overall is well-constructed (no wobbly nib and it doesn't spew inks out with the lightest movement). It's pretty (and limited edition, this gets me every time) and it writes (after some tine flossing) so yeah...

Where I bought it: at Jetpen for 29 bucks (free shipping). It's around the same price everywhere else (EF nib is generally a little more expensive than the Safari in other nib sizes).  If you want color from the permanent range (with a fine instead of EF nib), you can get it  from Amazon at around 22 bucks (Please note that the top result/best offer is from a seller in Germany, who takes a whole week to process the order, God knows how long to ship and another week to be processed in US custom..The 20 cents saving is definitely not worth it. Learn from my mistake.
Posted by Citrine